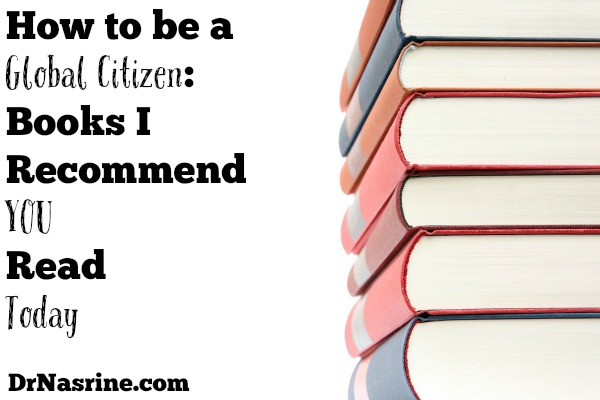 How to be a Global Citizen: Books I Recommend You Read Today

Learning how to be a global citizen does include being culturally aware, working towards increasing diversity in the workplace and increasing sensitivity towards other cultures by reading the right books.

Today I’d like to share my choices of must-read books that bridge the gap, widen our worldview and show us a glimpse of the cultures that exist beyond our own.

These books are not scholarly reads, but rather filled with gripping narratives that take you by the hand and lead you into worlds that are waiting to be explored.

They help you sneak a peek into cultures where girls may be dressed as boys and raised as such, ancient African tribal worlds that are disrupted by modern influences and more.

This beautifully illuminating book by Chinua Achebe tells the story of two, intertwining tales about a central character, Okonkwo, a “strong man” of a Nigerian village.

While one of the stories focuses on the struggle between the individual and the society, the other showcases the clash of cultures and the destruction of Okonkwo’s world with the arrival of European missionaries.

This book is definitely an eye-opening and engaging read about life in modern Africa.

To grow up as a girl may often be taken for granted by many of us. But as this revealing and remarkable book will show, it is indeed not as simple for the girls in Afghanistan.

A book by Jenny Nordberg who broke this story for the New York Times, The Underground Girls of Kabul is a gripping, moving and thought-provoking account of the bacha posh or a third kind of child – a girl temporarily raised as a boy and presented as such to the outside world.

The story has vivid characters who’ll stay with you long after the book is over and more importantly, to paraphrase the author, tell you what it is like, almost a decade into America’s longest war and one of the largest foreign aid efforts of a generation, to be an Afghan woman here.

No book list on being a global citizen and cultural awareness can be complete without an inclusion of one of the most inspiring girls the modern society has ever known – Malala Yousafzai.

This book is her memoir, her story.

Shedding light on what it takes to be born in a country where education is denied if you’re a girl. Where you can be killed for trying to resist. Where you can still have courage and parents who stand behind you in a society that values sons more.

In 2012, Malala was shot in the head at point-blank range while riding the bus home from school, and few expected her to survive. But she survived and thrived and went on to be the youngest recipient of the Nobel Peace Prize for her efforts in championing a cause she clearly believes deeply in: education for girls.

Inspiring, moving, eye opening, thought-provoking, I am Malala is definitely a must-read.

What books do YOU recommend reading for someone who wants to be culturally aware and start their journey to being a global citizen?

On Being A Trailing Spouse: Follow Me
Next Story »

How a Global Entrepreneur Builds Her Empire with Virtual...