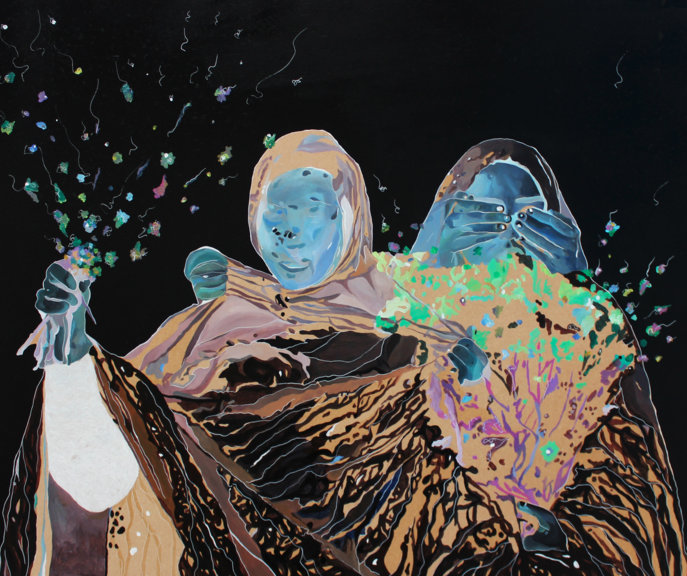 Abolish 153 will host its 2nd annual art exhibition at JAMM Art Gallery in Dubai from April 28th to May 8th, 2016 to fundraise for the campaign, with the opening exhibit evening taking place on April 28th from 6-9:00 pm. The exhibition will include 40 artworks in various media by 11 emerging artists from the GCC and Iran. The seven Kuwaiti artists include photographers Maha Al-Asaker and Farah Salem, as well as artists Thuraya Lynn Al Jasem, Zahra (Zouz The Bird) Al-Mahdi,Amani Althuwaini, Deena (Machina) Qabazard and Tareq Sultan.

Abolish 153 aims to eliminate article 153 from Kuwait’s penal code, which effectively gives men regulatory, judicial and executive power over their female kin in blatant disregard of the constitution, international agreements on human and women’s rights and even the Islamic Sharia.

Fifty percent of the proceeds from the sale will benefit the campaign.

All artworks shown at the exhibition were created for the purpose of this exhibition. Farah Salem’s photographs feature women trapped in boxes in various landscapes. It speaks about being boxed in either by society or by the constraints we internalize in our own minds.

Maha Al-Asaker uses flowers and the female form to highlight the beauty of female sensuality but also its fragility, how something sacred can also be violated. Zahra (Zouz The Bird) Al-Mahdi creates three impregnation capsules with price tags attached, underlining the right for women to control their own bodies, sexuality and reproductive organs. Thuraya Lynn Al Jasem creates dreamscapes full of symbolism and metaphor, leaving the interpretation up to the viewer.

Amani Althuwaini’s experimental works are also ambiguous in their subject matter. Her small-scale works are screen prints in seven layers. Her large work is acrylic on MDF. Abolish 153 notes that the law states that any man who surprises his mother, sister, daughter or wife in an unsavory act with a man and kills her or him or both will be treated as committing a misdemeanor, punishable by a maximum of 3 years’ jail time and/or a fine of 3000 rupees (KD 225). The goal of Abolish 153 is also to build coalitions across the GCC and Arab world to abolish similar laws across the region. Ultimately the aim of Abolish 153 is to create a safe environment where mothers, daughters, sisters and wives are protected from all forms of violence and to raise awareness of these violent practices and the legislation that sanctions them.

You can learn more about Abolish 153 by visiting their website at: http://www.abolish153.org/.

Most Stunning Outdoor Venues In Dubai
Next Story »